If Kenny Roger’s had been from the Highlands, his song ‘The Gambler’ would have been tweaked to be ‘The Baler’. The tone of the music matching the atmosphere when hay making. Having a clear one week sunny, light wind and no dew window would be desirable. Nearly a fantasy and seems more attune to the term ‘clutching at straws’; except it should be straw (and hay). In fact, there seems to be a strong similarity between gambling and hay making. When do we cut? Is the grass too short? Too long? Has it dried enough? Can we spread it? Rain is forecast, what do we do? When can we start baling? How long into the night will this go? And so on. Now, to add to the pressure, this was not our hayfield, but the neighbours. And you really don’t want to wreak their winter feed. Oh, and the Crofter had just left to go off shore but I still had relatives hanging about to help with watching a Mini and a Micro Crofter but not ones that could operate machinery and were supposed to be on holiday. not helping me work.

With haymaking though, unlike poker, there is no face to give any clues, just four different websites with weather forecasts and none of them agree.

And with that, this week has been sky watching, grass drying assessing and getting hay turners and balers ready (auto correct seems to think I should have been baking rather than baling; I haven’t, unless you count spreading the grass to ‘bake’ in the field. The Mini Crofter would probably have been very disappointed with that type of baking though).

So Kenny, you may have retired from your country singing, but how about a new recording of ‘The Gambler’, but called ‘The Baler’, and along the lines of:

You’ve gotta know when to mow them,

Know when to spread them

Know when to leave them

Know when to row

You never count your bales

When you’re sitting in the tractor

They’ll be time enough for countin’ 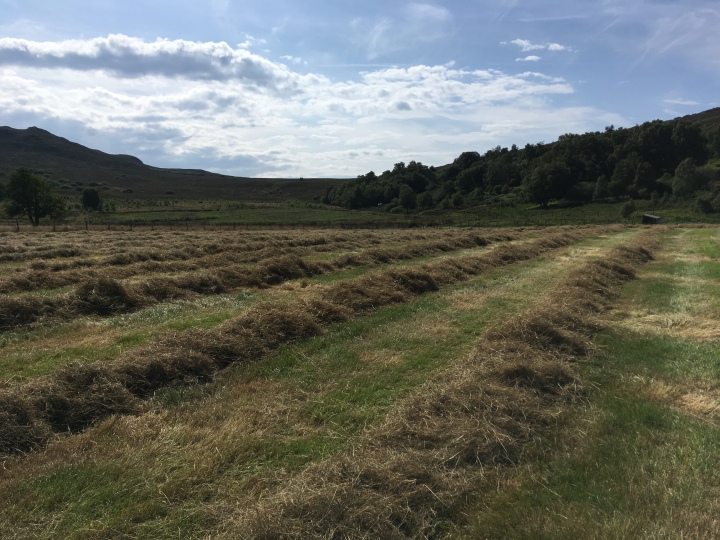